Farmhouse decor is a modern approach to cabin-inspired interior design. Mostly transitional in nature with some traditional elements mixed in, farmhouse aesthetic should transport your imagination to French Provence. Source some dried lavender bunches and other greeneries – careful arrangement of vases and planters will really stylize your home.

This is a look that hearkens back to the turn-of-the-century industrial era. It emphasizes liberal use of exposed steel with distressed wooden elements, frequently complemented by exposed brick walls. The modern variant commonly includes copper-tone accents. In terms of general feel, industrial decor is often rustic and mature.

Coastal style also dubbed Hamptons style, hails from the iconic U.S. beachside area. Common features include light, airy color palettes with cool neutral shades paired with blues and greens. Furnishings are often white or beige. The room can contain elements of wood and accessories are often inspired by the sea.

Let customers speak for us

Our tub arrived safe and sound. It will be installed within 1-month I would say. We’re excited to use it soon. Great customer service!

We love the Athena Steam Shower. All the functions and options make each use a luxurious experience. Linking with the blue tooth lets you enjoy your favorite mood music while steaming or showering. The lighting options are great and if you want aromatherapy that is an option also. The rain forest, jet and hand held shower all make the Athena a first rate spa experience in your own home. The Athena Steam Shower is truly amazing!

I love it and use it every week! Thank you for a great product!

I use the steam room daily at the gym, Covid-19 restrictions have closed both steam room and sauna in many facilities. I bought this unit to get my routine back in order. Very happy with the quality and how fast it produces steam. The temperature sensitive cabin works exactly like a commercial grade steam room, this unit is listed on the manufacturer website for over $7300, findyourbath has a steal price!! 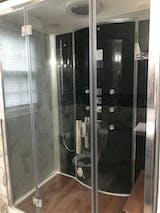 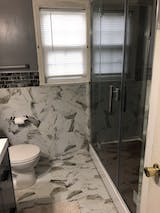